A Michigan man’s obsession with the pro-Trump QAnon conspiracy theory culminated in a Sunday incident in which he murdered his wife and badly injured one of his children, his daughter told The Daily Beast. Igor Lanis, a 53-year-old resident of the Michigan city of Walled Lake, was killed Sunday by police after he started shooting at them with a shotgun, according to the Oakland County Sheriff’s Office. Inside Lanis’ house, police found Lanis’ wife, Tina Lanis, dead after being shot four times with a handgun. Lanis also shot his daughter Rachel, 25, in the back and legs with a shotgun during the attack, but she managed to call police and survived. Lanis also killed the family dog, shooting it multiple times. The sudden violence stunned Lanis’ other daughter, 21-year-old Rebecca Lanis, who was at a friend’s birthday party during the murder. Rebecca Lanis told The Daily Beast that her father became obsessed with QAnon and other conspiracy theories in 2020, consuming huge amounts of online videos and following far-right figures like InfoWars’s Alex Jones. According to his daughter, Igor Lanis was a car designer with no history of violence. She described her parents as once “extremely loving,” but her father changed after Donald Trump lost 2020. “He had a sense of reality,” Rebecca Lanis said. “But then after 2020, when Trump lost, he started going down these crazy rabbit holes.” That year, Lanis became fascinated by QAnon and the idea that Joe Biden stole the election. “It’s a very big contributor to what happened,” Rebecca Lanis said of her father’s QAnon beliefs. 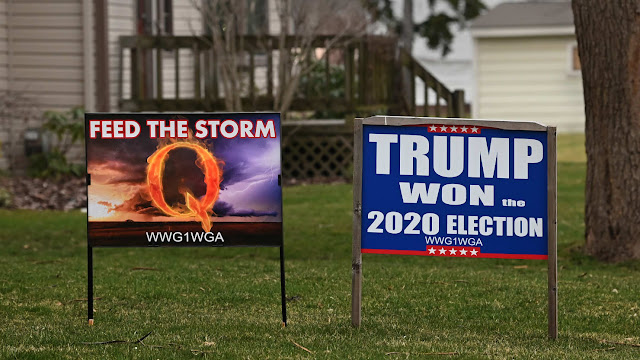 Igor Lanis’ mental health worsened as he became drawn into the conspiracy theories, according to Rebecca Lanis. He insisted that family members watch conspiracy theories videos about the 5G cell towers, vaccines, and the election. He started to believe that some world leaders were in fact alien lizard-people in disguise, a fringe conspiracy theory even among QAnon supporters. Rebecca Lanis said family members tried to pull her father out of his beliefs, but arguing with him was “pointless.” The Walled Lake shootings are just the latest killing tied to QAnon. A California man who allegedly murdered his 10-month-old daughter and 2-year-old son in Mexico told police that his crimes were motivated by QAnon, according to prosecutors. In 2019, a QAnon believer allegedly killed the purported head of the Gambino mafia family in a misguided attempt to bring him to a QAnon tribunal. That suspect was deemed mentally unfit to stand trial. Earlier that year, a Seattle QAnon believer convinced his brother was a lizard person murdered him with a samurai sword. As Igor Lanis became more obsessed with QAnon, Rebecca Lanis tried to research the conspiracy theory on a Reddit forum for people who have lost family members to the movement. On Sunday, she posted there with a message about the murder, writing “Fuck you, Qanon.” Rebecca Lanis said she wants QAnon promoters to be sued for the damage they cause, and hopes the federal government will investigate them. As she waited to talk to her injured sister in the hospital on Monday, Rebecca Lanis said she wanted to warn people that QAnon and other conspiracy theories could affect their loved ones, too. “It could really happen to anybody,” she said. Source
Email Post