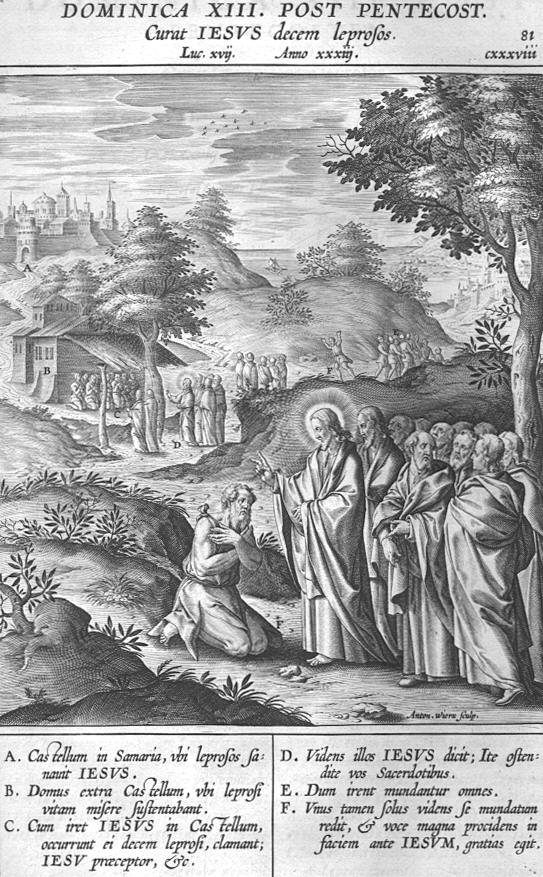 If Christ in sending these lepers to the Priests according to the law, or if the law commanding it, had meant nothing but for their corporal cure; surely Christ would have sent them to a Physician, to whom the cure, and knowledge thereof doth properly appertain, and not unto Priests; or else Christ being an extraordinary physician sent into the world by God his Father to cure all diseases, would have cured them himself: But by his sending them to the Priests, it appeared plainly, that this corporal law as also divers other of this kind in the old Testament, were figures and images of spiritual laws, and mysteries under the new; and therefore Christ sent these lepers to the priests of the old law, to end the old law in that behalf with honor, and to begin the new; and therefore he himself being the high Priest of the new Law, forgave sins himself, and gave power unto others to do the like, saying unto them: Whose sins so ever ye forgive on earth, shall forgiven them in heaven, and whose sins ye retain on earth, shall retained in haven.

Which words, if there were no other thing else in all the Scripture to confirm them, as there are many, the universal Church of Christ taking them as a sufficient Commission of remission of Sins by priests, in the Sacrament of Penance, for all future ages, and practicing the same, ought to be of far more authority and credit with any wise man, then any other private interpretation or argument to the contrary whatsoever, Christ giving the church authority and warrant in the Scripture to interpret the same aright, promising to send the holy Ghost which should direct her in all truth, and commanding us to hear her.

But Christ confirmed them in the Text aforesaid with these circumstances; he said unto his disciples, As my Father sent me, so I send you, and then he breathed upon them & said; receive ye the holy Ghost, and then spoke those words aforesaid, Whose sins ye forgive on earth, shall be forgiven in heaven &c.
Which confirmed them very much, and did not concern the disciples alone, but all their successors forever, according to these words of Christ unto them, and behold, I will be with you, (in teaching you all truth) all days to the end of the world: which words must needs be understood of them and their successors to the worlds end, for they themselves were not to continue so long: and therefore the Church, in the consecration of Priests, doth ever since use the ceremony of breathing upon them, & pronouncing these words aforesaid, whose sins ye forgive on earth &c.
And this is the mystical sense of the law of the lepers, & of sending these ten lepers, to the priest. Moreover by this law of the lepers, that they were sequestered, and banished from the society, and cohabitation of men, we may learn, that if so great care was used by the Magistrates and Governors of the commonwealth to preserve men from contagion, and infection of their bodies; how much more should there be of their souls, whereof this law was but a figure? And that, if there be not due laws made to restrain sinners, from infecting others, which can hardly be, unless they be men of so good conscience that they would not, though with importunity they might; yet men that would not be infected, should have so much care of their own souls, that they should banish and sequester themselves, from all occasions of sin, especially of familiarity & conversation with contagious persons, who are the most dangerous occasions of all.

And of the occasions of sins in general we have a figurative instruction in the holy Scripture, where the Jews being commanded to eat unleavened Bread for seven days, at their Pass-over out of Egypt, to avoid the occasion of breaking this commandment, were commanded also, not to have any leavened bread in their houses, nor any leaven, for so the Greeks & Chaldee translation do yield.

Which occasions of sin St. Paul compareth very aptly unto leaven, saying t the Corinthians, by way of interrogations: Know ye not, that a little leaven soureth a whole lump of dough? As if he should say, if you know not, that a small occasion may induce you into a great sin, ye know nothing & therefore purge yourselves (sayth he) of the old leaven, of occasions of sin, that you may be a new conspersion free from sin.

And concerning the occasions of familiarity with men of corrupt life, whereas other occasions of sin concur with us but passively, that is to say, not doing anything with us; ill men concur actively, persuading and enticing us to sin, especially if they be Heretics, whose nature and profession is, under the color of saving our souls, to gain us to their opinions, and therefore these are the most dangerous occasions of all: for besides our own inclination to sin, which by corruption of nature is very strong in us our affection we have by nature unto men of our kind, (as everything by nature loveth his own kind) especially if they sympathize, or agree with us in condition, as they do in nature, is a very strong attractive, and a double occasion; & therefore we must avoid this occasion of familiarity with ill men, that will draw and allure us to ill ( we being prompt and prone thereunto by nature) as we would a serpent, especially of Heretics, whose nature and profession is, aforesaid, under the color of saving our souls Souls, to draw and invegh us to their opinions, and whose speech, as St. Paul sayth, creepeth on, and infecteth like a Canker, or rather (to speak according to our present subject) like a leprosy, which by little and little runneth over all the body, and defileth it with its ugly deformity; of which spiritual leprosy, as well as of other sin, these ten lepers were a figure, as appeareth in that they cried out unto Christ, with these words: Jesu Master (or Teacher) have pity upon us; which word (Master or Teacher) doth more properly import instruction in faith, then corporal health, which though these lepers did not mean, but the cure of their corporal disease, yet God ordained, they should use those terms, to signify unto us the leprosy of heresy, and false doctrine, as well as sin: nay St. Paul calleth Heresy, Sin and a sin of the flesh, that is to say, an itching humor to novelty, and singularity in religion, whereunto we are prone, by the natural corruption of our flesh.