CONSIDERATIONS FOR SUNDAY WHY THE GOSPEL OF DOOMBS-DAY IS READ UPON THE FIRST SUNDAY IN ADVENT SUNDAY MEDITATION: A PLAINE PATH-WAY TO HEAVEN THOMAS HILL 1634 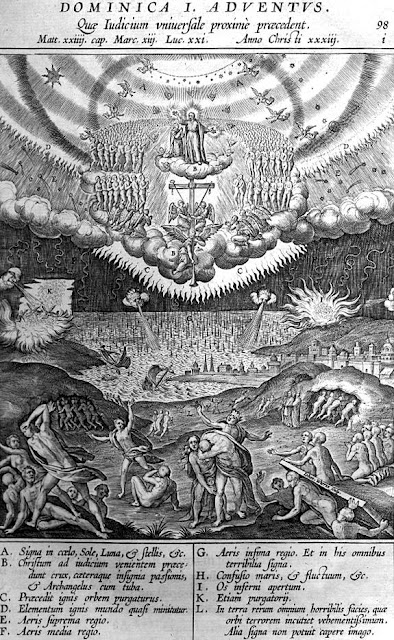 GOSPEL Luke 21. 25-33
At that time, Jesus said to His disciples: "There shall be signs in the sun, and in the moon, and in the stars; and upon the earth distress of nations, by reason of the confusion of the roaring of the sea and of the waves: men withering away for fear and expectation of what shall come upon the whole world. For the powers of heaven shall be moved; and then they shall see the Son of man coming in a cloud with great power and majesty. But when these things begin to come to pass, look up and lift up your heads, because your redemption is at hand." And He spoke to them a similitude: "See the fig tree, and all the trees; when they now shoot forth their fruit, you know that summer is nigh; so you also, when you shall see these things come to pass, know that the kingdom of God is at hand. Amen I say to you, this generation shall not pass away till all things be fulfilled. Heaven and earth shall pass away, but My words shall not pass away."
Sunday Meditation
When the old law was given in the Mount of Sinai unto Moses, it was promulgated,with lightning, and thunder,and clouds of smoke, with noise of trumpets, and such like terrors; that the people seeing, and hearing it, cried unto Moses: speak thou unto us, and we will hear thee; let not our Lord speak unto us,least we die for fear.Exod.20.v.20.
All which was done, that they should remember to keep that law with more care, which was delivered them out of such terror; acknowledging that these shows of terror, were threatenings, and significations of the great punishments which were to fall upon the breakers of the law.
In like manner our holy mother the Church, a little before she celebrates the feast of the coming of Christ our Savior into this world, to give us a new law, a law of love and of salvation; which is called his first coming: expresseth unto us the terrors, of the second coming,of Christ our Lord to the last general judgement.
Which terrors are far greater then those which went before the old law; as being such, that the scripture sayth were never before in the world (though the drowning of the whole world by the deluge or flood of Noe) were indeed very terrible,nor should ever be the like.
Which is to stir us up to keep faithfully the law of the new testament,and to prepare ourselves now effectually thereunto against holy times of Christmas: And if we neglect to do so,to signify unto us that, which St Paul wrote unto the Hebrews (10.v.20) If any man break the law of Moses being convicted by two or three witnesses, he died for it without mercy: how much more shall he deserve greater punishment,that shall tread under foot the son of God, and pollute the blood of his testament, and offer contumely unto the spirit of grace?
In regard that Christ came from heaven to the earth, and abased himself so much as to takehiman flesh,and therein to suffer so many indignities as he did, and at last a most cruel &ignominious death to save mankind, and to give us a saving law; which he taught us with his own blessed mouth;a favor never done before, since he spake heretofore to the people by the mouths of his prophets and servants.
He therefore that breaketh this law,at least carelessly and negligently may be said in a certain manner (according to St.Pauls judgment) to tread Christ under his feet, and to trample upon his blood, who is to be his judge at the later day, and after this life; how merciful soever he shew himself in this life present.
This life is our day, the next life is his day: as he is merciful here, so is he just there; and will not omit to take revenge, according to that which followeth in the aforesaid text of the Apostle to the Hebrews. Revenge to me: That is,if any man tread and trample upon me, and pollute the testament of my blood shed for him,not caring to keep my ;aw;I will be revenged upon him at the day of judgment, and pay him home for all.
A dreadful sentence, which ought to move us diligently to lay hold upon the meek mercies of Christ for whole nativities feast we prepare ourselves in this holy time of advent, that we may deserve his favorable sentence, when we come to the thrown of this judgement.