The merchants of the earth have been made rich by the power of her delicacies....... And the merchants of the earth shall weep, and mourn over her: for no man shall buy their merchandise any more. Merchandise of gold and silver, and precious stones; and of pearls, and fine linen, and purple, and silk, and scarlet, and all thyine wood, and all manner of vessels of ivory, and all manner of vessels of precious stone, and of brass, and of iron, and of marble, And cinnamon, and odours, and ointment, and frankincense, and wine, and oil, and fine flour, and wheat, and beasts, and sheep, and horses, and chariots, and slaves, and souls of men. And the fruits of the desire of thy soul are departed from thee, and all fat and goodly things are perished from thee, and they shall find them no more at all. The merchants of these things, who were made rich, shall stand afar off from her, for fear of her torments, weeping and mourning. And saying: Alas! alas! that great city, which was clothed with fine linen, and purple, and scarlet, and was gilt with gold, and precious stones, and pearls. For in one hour are so great riches come to nought; and every shipmaster, and all that sail into the lake, and mariners, and as many as work in the sea, stood afar off. And cried, seeing the place of her burning, saying: What city is like to this great city? And they cast dust upon their heads, and cried, weeping and mourning, saying: Alas! alas! that great city, wherein all were made rich, that had ships at sea, by reason of her prices: for in one hour she is made desolate. Rejoice over her, thou heaven, and ye holy apostles and prophets; for God hath judged your judgment on her. Apoc.18
In order for the abomination of desolation to appear in the Temple of Jerusalem - Jerusalem must be destroyed - must be desolated. Then the abomination will appear in the Temple of Jerusalem. See here:ABOMINATION OF DESOLATION: JERUSALEM WILL SOON BE UNINHABITABLE FOR GENERATIONS TO COME UP UNTIL THE MANIFESTATION OF THE ANTICHRIST
How do we get there?
God destroys Jerusalem with fire from Heaven making Jerusalem desolate.
Why does God destroy Jerusalem?
Because of the wicked FSSP Merchants. Because of their greed.
These FSSP Merchants will soon turn  Jerusalem into a tourist destination. Probably starting in 2030.
Many FSSP Rad Trad Converts will host these Holy Land Tours in the coming years - most of them will become very rich.
The major player in this will be the Forerunner to the Antichrist. With his help Jerusalem will be built up to where all Holy sites will be covered by Hotels and special passes/permission will be needed in order to visit these Holy sites.
So instead of Catholic Churches built on the Holy sites - they will be replaced with Hotels. Kind of like what you see in this image of a future city in the Saudi Desert: 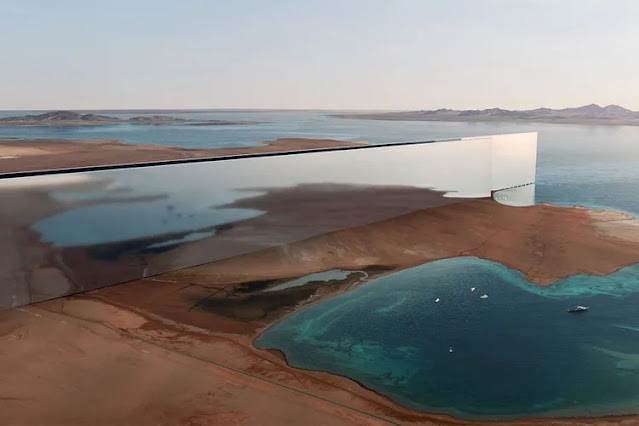 Saudi Arabia’s new mirrored city
All of these Hotels will be owned by all of your favorite FSSP Rad Trad Influencers - these will be the Merchants Found In Apocalypse 18.
But before this happens there must be FSSP Rad Trad Influencers Holy Land Tours. These Tours will be financed by Opus Dei, Legionaries of Christ and the FSSP.
The Forerunner to the Antichrist will be instrumental in setting up Jerusalem as a tourist haven.
So be on the look out for Dr. Taylor Marshall, Michael Voris, Dr. Mazza, Mike Parrott, Ann Barnhardt etc talking points on Holy Land Tours for the 2000 year anniversary of Our Lords Passion. 2030-2033. That's in 7 years.
Now you know ahead of time who these Merchants are In Apocalypse 18 (whose names are not written in the book of life from the foundation of the world).
As a result I will post more on the developments in Israel/Jerusalem
ARCHBISHOP VIGANO IS THE TWO FACE NAPOLEON: