MONDAY MORNING
This day,when thou hast made the sign of the cross, with such preparation as shall hereafter be declared in the fourth chapter; thou hast to meditate upon our savior Christ washing of his Apostles feet: and upon the institution of the most blessed Sacrament of the Altar.
TEXT OF THE HOLY EVANGELIST
When the hour of supper was come, Our Savior Christ sat down at table, and his twelve Apostles with him. And he said unto them. I have had a great desire to eat this Passover with you, before my passion. And as they were eating, he said: verily I say unto you, that one of you shall betray me. And they were exceedingly sorrowful, and began every one of them to say unto him. Is it I, Lord. And he answered, and ſaid. He that dippeth his hand with me in the dish, he ſhall betray me. The son of man goeth his way, as it is written of him. But woe be to that man, by whom the son of man is betrayed. It had been good for that man, if he had never been born. Then Judas that betrayed him, anſwered and ſaid. Is it I, master. And he said unto him, Thou hast said.
When supper was done, he rose up from the table, and put off his garments: and taking a to- - Ioan. 13, E ij Meditationfor well, he girded him self with it. After that, he poured water into abaſyne, and tºm. to wash his disciples feet, and to wipe them with the towel, wherewith he was girded. Then he came to Simon Peter. who ſaid to him. Lord, doſt thou wash my feet? Jesus answered, and said unto him: what I do, thou knowest not now: but thou ſhalt know it hereafter. Peter said unto him. Thou shalt never wash my feet. Jesus anſwered him.If I wash thee not, thou ſhalt have no part with me. Simon Peter ſaid unto him. Lord, not only my feet, but my hands, and head also. Jesus said unto him. He that is washed, needeth not to wash, saving only his feet: but he is clean every whit. And ye are clean, but not all.
For he knew, who should betray him.And therefore he said: year not all clean. So, after he had waſhed there feet, and had taken his garments, and was ſet down again: He said unto them. Know ye, what I have done to you? ye call me maſter,and Lord. And ye say well. For ſo I am in deed. If I then, being your Lord, and maſter, have washed your feet: ye ought also to wash one an others feet. For I have given you an example,that ye ſhould do, even as I have done to you. After our Saviour had thus washed there feet, he took bread, and when he had bleſſed, he brake, and gave to his diſciples, ſain- ge. Take, and eat: this is my body. He toke the Cup likewiſe, and when he had blessed it, he ga- E iij for ue it them, saying: Drink ye all of this. For this is my blood of the new testament, which shall be shed for many, for the remiſſion of sins. So often as ye shall do this thing, do it in remembrance of me. 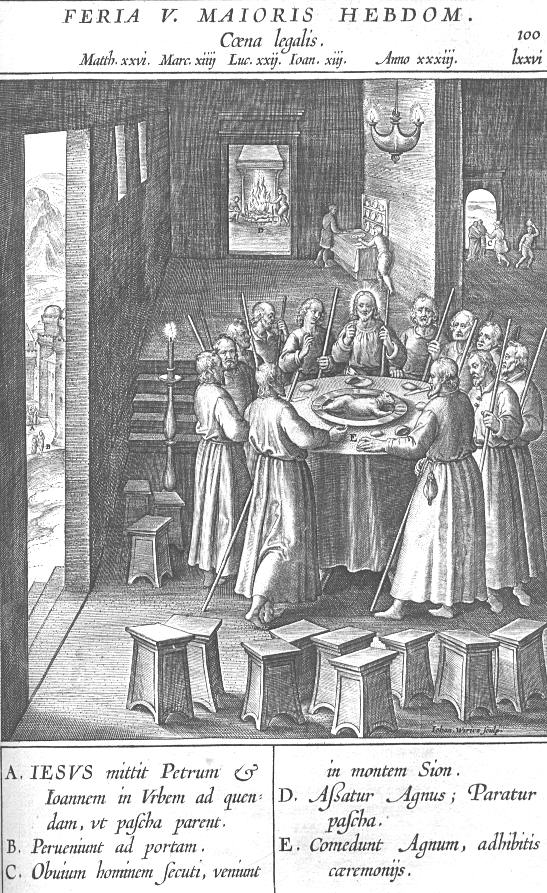 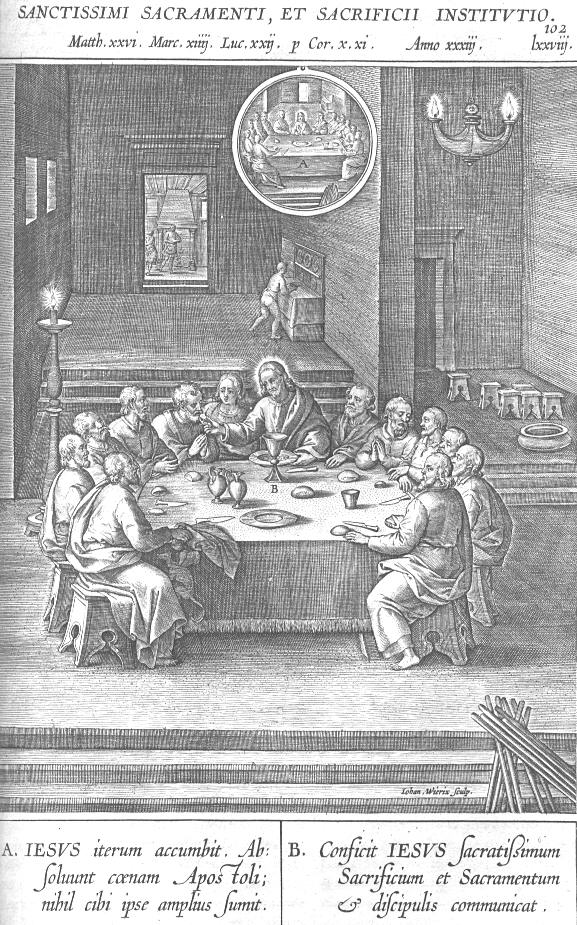