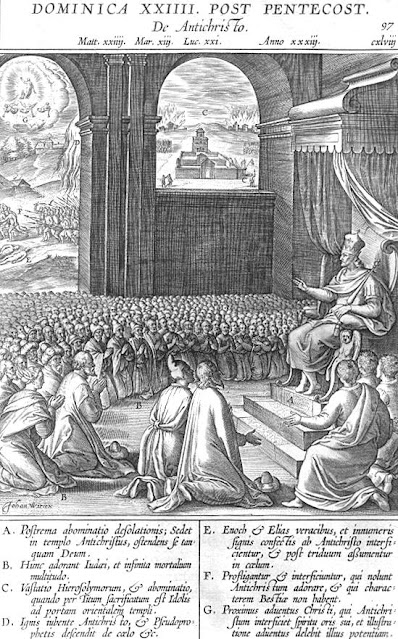 Immediately before this gospel St.Matthew related how when Christ sat upon the mount Olivet with his disciples, they bid him behold the City of Jerusalem,and the goodly buildings thereof; but Christ answered, the time should come when it should be so utterly destroyed that there should not be left one stone upon another, they suspecting as it seem she meant it also of the day of doom, came to him, and asked him, when it should be destroyed, and when the day of doom should be, and what sign he would give them thereof? and hereupon followed this gospel, wherein Christ gave them divers signs of the day of doom, and divers admonitions against it came.

The affliction of Jerusalem when it was destroyed was so wonderful great,as nothing greater in the world: yet of the destruction of the world Christ sayeth, there never was the like tribulation from the beginning of the world unto that day, nor never shall be.

As the tribulation of the destruction of Jerusalem was a figure of the tribulation of the day of doom; so may the tribulations of the day of doom be a figure of the tribulations & pains of Purgatory. for the greatness thereof,as appeareth by the piteous cry of a soul in Purgatory unto us here alive, have pity upon me, have pity upon me, at least yee that be me friends; as also out of the piteous expostulation of Job with almighty god, in the person of a soul in Purgatory, in the Lessons of the Dirge, accommodated to that purpose by the Church; only the souls in Purgatory know their pains shall have an end, & after that everlasting felicity in heaven, whereof the very dilation (they being stripped out of the world and separated out of their bodies, and consequently out of all the pleasures and delights thereof, the vision of God being the Center of a separated soul) is as great a pain,as the other, and therefore one cause why the tribulations of the day of doom are so great, is, that the elect might be purged suddenly, before their death, there being afterwards no more Purgatory, for nothing can enter into the kingdom of heaven that is defiled, till it be purged and made clean, and every ones work as St Paul sayth,must be tried by fire, whereof our fire is but a shadow.

Consider thereof the grievousness of our Purgatory after this life, prevent it as much as you can in this life, and second it with satisfactions to be done after your death.

Whereof we have very good means in these days in our poor miserable country, to wit store of poor necessitous Priests in prison for their Religion, who may offer up the sacrifice of the Mass, which both in regard of it self, as also of the Almes,is the most satisfacorious thing that can be done.

This is that of which Judas Machabeus said, it was a holy & holsom thing: this is that whereof St. John the Evangelist sayth in one sense,Blessed be the dead that die in our Lord, they shall rest from their labors, for their works do follow them, that is to say, such alms and prayers as they founded here, to be executed from them, and in their name after their decease, follow them, and free them from the pains of Purgatory, that they quickly be with God, the Center of their soul.