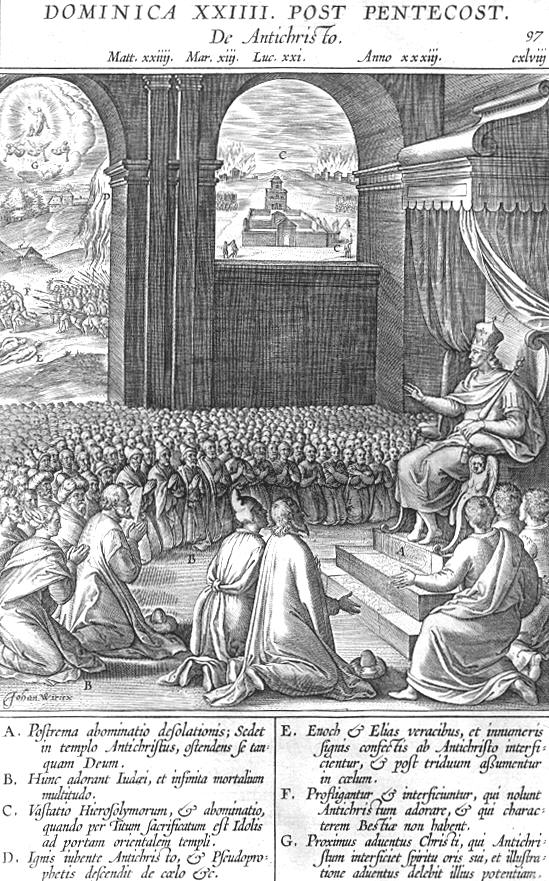 Saturday Meditation
Antichrist must be born at Babylon, which signifies Confusion, because he bringeth confusion into the world and shall be confounded himself at last.

Enoch and Elias shall come & preach against him, he shall put them to death in the holy City, they shall rise again,and confound him, he shall oppose himself directly against Christ,and thereof is called Antichrist, a Greek word, which signifies in English, Against Christ.

The reason is this, that whereas there be two Advents,or Comings of Christ, the first as a Savior and Redeemer into this world, the second as a Judge at the end of the world; the Church would have this Gospel,and that of the first Sunday in Advent to be of Antichrist,& the second coming of Christ,and so to begin his first coming with the memory of his second, that the memory and meditation of his second coming, might prepare us the better to keep his first, secure us the better against his second, either at the general day of doom,or our particular death, according to the prayer for Christmas Eve, alluding hereunto in these words: O God who doest glad us, with the yearly expectation of our Redemption;grant that they only begotten son our Lord Jesus Christ, whom we do now joyfully receive, as our Redeemer, we may securely see coming as our Judge.