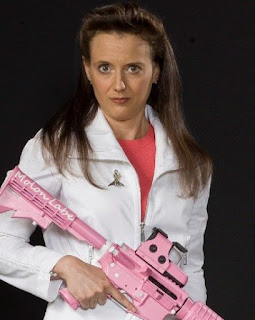 Ann's 1 Million words trying to convince us that Pope Francis is the Anti-Pope are nothing but straw.

Ann is a demented witch who claims that Pope Benedict is the Restrainer in 2 Thessalonians 2 before the final advent of the Antichrist!

All Church Fathers have said that the Restrainer in 2 Thessalonians 2 is the Divine Authority of the Holy Roman Emperor.

Here is Ann claiming that she should not be mocked:
Pope Benedict is dead. For the first time since ARSH 2005, the See is Vacant and we are in an Interregnum. Pray for Pope Benedict, for the Papacy in se, and for Holy Mother Church. And steel yourselves.
Yes, the 1958 Sedevacantists AND the “Fwanciss is definitely Pope, stoopid!” contingent are already sending spiteful, mocking emails. I’ll post some later so you can see their hissing, pride-soaked venom as they try desperately to hold the irrational premise that the objective binary reality of Pope Benedict being dead and the See being vacant for a matter of minutes is “exactly the same thing” as the error and corollary IDEOLOGY that there has been no Pope since the death of Pope Pius XII sixty-four years ago in ARSH 1958.
I’m happy to let them vent not only their spiteful rage, but their dishonesty – because I don’t believe that any of them are stupid enough to not savvy the difference. But what they ARE trying to do is convince as many “normies” as possible of the lie that it IS the same, thus sowing chaos, error and confusion exactly like the enemy who came into the wheat field and sowed the weeds.
Pray for Pope Benedict, and pray especially the “fiat voluntas tua”, “Thy will be done,” of the Pater Noster, and mean it.
Steel yourselves. The removal of the Restrainer in 2 Thessalonians 2 before the final advent of the Antichrist, whom Antipope Bergoglio has been and will no doubt continue preparing the way for, seems to be happening. The Pope qua Pope, Peter as the Vicar of Christ on Earth and visible head of the Church on Earth, is, for now, removed.
We have no idea how the Divine Providence will play out, but we do know with perfect confidence how the story ends, and who triumphs. And so, as we mourn the death of Pope Benedict XVI Ratzinger, and we gaze upon the See of Peter, vacant for the first time since April ARSH 2005, we can truly say and mean:
This is the LORD’S doing, and it is marvelous in our eyes.
Pope St. Sylvester, pray for us.
St. Benedict, pray for us.
St. Joseph, pray for us.
Our Lady of Copacabana, pray for us.
Lord Jesus Christ, have mercy on us, on Joseph Ratzinger, and on Your Holy Catholic Church, outside of which there is no salvation. Source
Email Post