GOOD MORNING EVERYBODY! POPE BENEDICT IS DEAD - WE ARE DOWN TO ONE POPE BEFORE THE CHASTISEMENTS START! ~ SIGNED MÉLANIE 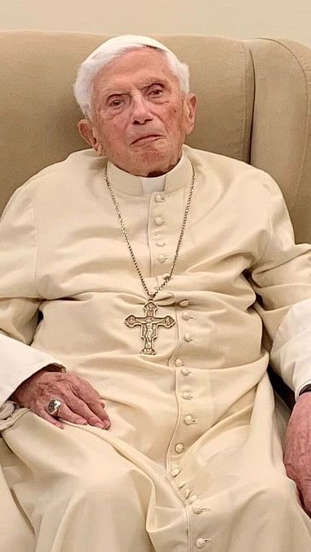 "I didn't see, I don't see any Great Pope or Great Monarch before an extremely great tribulation, horrifying, terrible and general for all Christendom. But before that time, twice there will be a short lived peace; TWO shaky, servile, doubtful popes" Mélanie
Pope Benedict is dead we are now down to one Pope before the Chastisements start!
Benedict XVI, first pope to resign in 600 years, dies at 95
VATICAN CITY (AP) — Pope Emeritus Benedict XVI, the shy German theologian who tried to reawaken Christianity in a secularized Europe but will forever be remembered as the first pontiff in 600 years to resign from the job, died Saturday. He was 95. Benedict stunned the world on Feb. 11, 2013, when he announced, in his typical, soft-spoken Latin, that he no longer had the strength to run the 1.2 billion-strong Catholic Church that he had steered for eight years through scandal and indifference. His dramatic decision paved the way for the conclave that elected Pope Francis as his successor. The two popes then lived side-by-side in the Vatican gardens, an unprecedented arrangement that set the stage for future “popes emeritus” to do the same. And now Francis will celebrate Benedict’s funeral Mass on Thursday, the first time in the modern age that a current pope will eulogize a retired one. A statement from Vatican spokesman Matteo Bruni on Saturday morning said that: “With sorrow I inform you that Pope Emeritus Benedict XVI died today at 9:34 in the Mater Ecclesia Monastery in the Vatican.” Benedict’s body will be on public display in St. Peter’s Basilica starting Monday for the faithful to pay their final respects. Benedict’s request was that his funeral would be celebrated solemnly but with “simplicity,” Bruni told reporters. The former Cardinal Joseph Ratzinger never wanted to be pope, planning at age 78 to spend his final years writing in the “peace and quiet” of his native Bavaria. Instead, he was forced to follow the footsteps of the beloved St. John Paul II and run the church through the fallout of the clerical sex abuse scandal and then a second scandal that erupted when his own butler stole his personal papers and gave them to a journalist. Being elected pope, he once said, felt like a “guillotine” had come down on him. Nevertheless, he set about the job with a single-minded vision to rekindle the faith in a world that, he frequently lamented, seemed to think it could do without God. “In vast areas of the world today, there is a strange forgetfulness of God,” he told 1 million young people gathered on a vast field for his first foreign trip as pope, to World Youth Day in Cologne, Germany, in 2005. “It seems as if everything would be just the same even without him.” With some decisive, often controversial moves, he tried to remind Europe of its Christian heritage. And he set the Catholic Church on a conservative, tradition-minded path that often alienated progressives. He relaxed the restrictions on celebrating the old Latin Mass and launched a crackdown on American nuns, insisting that the church stay true to its doctrine and traditions in the face of a changing world. Source