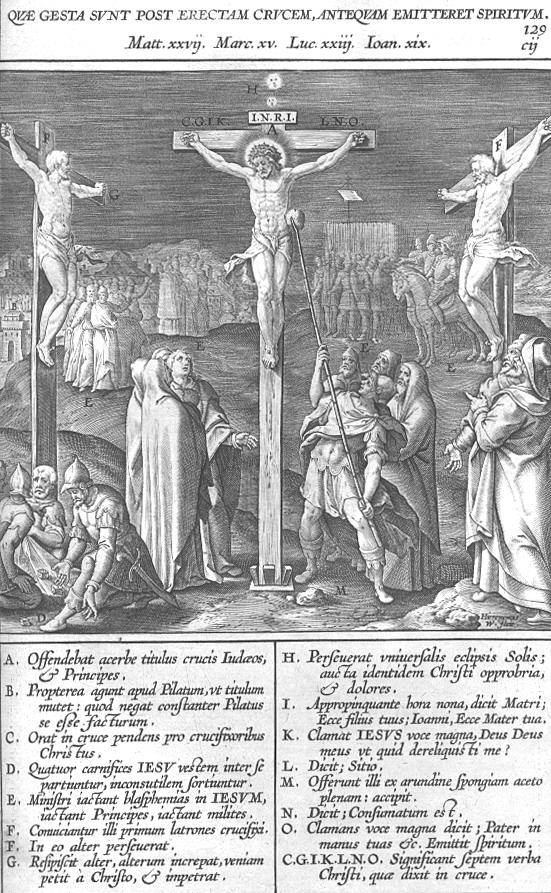 FRIDAY IN THE MORNING
This day (when thou hast made the sign of the cross, and prepared thy self hereunto) thou hast to meditate upon the mystery of the cross. And upon these seven words, which our Savior spake being crucified on the same.
THE TEXT OF THE HOLY EVANGELIST

They came (saieth the holy Evangelist) to the place called Golgotha, that is to say: the place of dead mens skulls. And they gave him vinegar to drink mingled with gaule.And when he had Frydaiemorninge. 9 4 had taſted thereof, he would not drink. It was then three a cloc- ke. And they crucified him, and with him two thieves, one at the right hand, and the other at the lefte. And ſo was the ſcriptu- re fulfilled, that ſaieth, And he was reckoned among the wicked. And Pilate wrote alſo a title, and put it vpon the Croſſe. And it was written: Jesus of Nazareth kinge of the Iewes. This title manie of the Iewes did reade. For the place where Jesus was crucified, was nea- re to the citie: and it was written in Hebrewe, Greeke, and Lattin. Then ſaid the high preiſtes of the Jews to Pilate: write not: the king of the Jews, but that he said, I am king of the Jews. Pilate anſwered: what I have written, I have written.
Then the soldiers when they had crucified Jesus, took his garments, and made four parts, to every soldier a part. And they took his coat also , which was without any seam, woven fro the top throughout. Therefore they said one to another. Let us not divide it, but caſt lots for it, whoſe it shall be. This was done, that the scripture might be fulfilled, that saieth. They parted my garments among them, and upon my coat they cast lots. So the soldiers did theſe things indeed.
And they that passed by, reviled him, wagging their heads, and saying: Fye on thee, thou that destroy the temple, and buildest it in three days, save thy self. If thou be the son of God, come down from the cross. Likewise also the high priests, mocking him with the Scribes, and elders, and Pharisees, said. He saved others,but he cannot save him self. If he be the king of Israel, let him now come down from the Cross, and we will believe him. He truſteth in God. Let him deliver him now , if he will have him. For he said: I am the son of God. The very same words also, did the thieves, who were crucified with him, caſt in his tee- the. But Jesus said. Father par- don them, for they know not what they doe.
And one of the malefactors, that was crucified with him, blaſ. phemed , ſayeinge: If thou be Chriſte, ſaue thy ſelfe, and vs. But the other anſwered,and rebu- Luc.13. Meditation for Ioan.19. ked him, ſayenge: Neither doeſ! thou feare God, beinge in the ſel- fe ſame codemnation. We are iuſt- lye punniſhed : for we receaue accordinge to our doinges. But this man hath done nothinge amiſſe. And he ſaied vnto Ieſus. Lord remember me, when thou commeſt into thy kingdome. Then Ieſus ſaied vnto him. Vere- lie I ſaie vnto thee,This daie ſhalt thoube with mein paradiſe.
There ſtoode by the Croſſe of Ieſus, his mother, and his mothers ſiſter, Marie the wife of Cleophas, and Marie Magdalene. And when Ieſus ſave his mother, and the diſciple whom he loued ſtandin- ge by: he ſaied vnto his mother: Woman,beholde thy ſonne.Then he ſaied to the diſciple : behol- de thy mother. And from that howre, Fodaiemorninge. 96 howre, the diſciple tooke her for his mother.
Abowte the ninthe howre, Ie- ſus cried with a lowde voice: ſa- yenge: Eli, Eli, Lamaſabadthani: that is: My God, my God, why haſt thou forſaken me? And ſo- me of them that ſtoode there, when they harde it, ſaied. This man called Elias.Some other ſaied: let vs ſee, if Elias will come and ſaue him.
Afterwardes Ieſus knowinge Ioan.19. that all thinges were fulfilled, that the ſcripture might be accompli- ſhed, ſaied:I am a thirſt. And . re was ſeta veſſell full of vinegar, and they filled a ſponge with vi- negar, and put it abovt an hiſo- pe ſtalke, and put it to his mou- the. Now when Ieſus had recea- ucd of the vinegar, he ſaicd. It is Math, 17. Meditationfor luc.13. Matth.27. finiſhed.
And he cried againe with a lovde voice, and ſaied: Father in- to thine handes I commende my ſpirite. And from the ſixte hower, there was darkenes ouer all the car- the vntill the ninthe hower. And the veile ofthe temple was rent in two partes , from the toppe to the bothom.And the earthe qua- ked, and the ſtones were clouen. And the graues opened them ſel- ues, and maniebodies ofthe Sain- Čtes , which ſlepte, aroſe. And there were manie of his fryendes and acquaintance, and women beholdinge him afarre of Emon- ge whom, was Marie Magdalene, and Marie the mother of Iames the yonger, and of Ioſephe, and Salome,who had folowed him out of Galilee, miniſtringe vnto him: - - with Frydaie morninge. 97 with manie other women, that came in his companie to Ieruſa- lem.
MEDITATIONS UPON THESE POINTS OF THE TEXT
E are now come ( o my ſoule) to §§ the holie mounte Caluarie, and we § § be nowe arriued at the toppe of the e- miſterie of our redemption. O how wonderfull is this place? Verelie this is the howſe of God, the gate of heauen, the lande of promiſe, and the place of ſaluation. Here is planted the tree of life. Here is placed that miſticall ladder that Iacob ſawe, which ioy- neth heauen with the earthe, whereby the angells doe deſcende vnto men, and men doe aſcende vnto almightie God. This is (o my ſoule) the place of praier.Here oughteſt thou to adore, and id: our Lorde, and geue him moſt humble, and hartie thanckes for this his moſt highe and excellent benefit : ſayen- ge thus vnto him. We worſhippe and adore thee & Lord Ie- ſus Chriſt, and we bleſſe thy holie name, - - - - - - N Geneſ..18.
Email Post