The Sunday Within The Octave Of Christmas The Gospel Luc. 2.v.33. Friday Meditation: A Plaine Path-way To Heaven Thomas Hill 1634 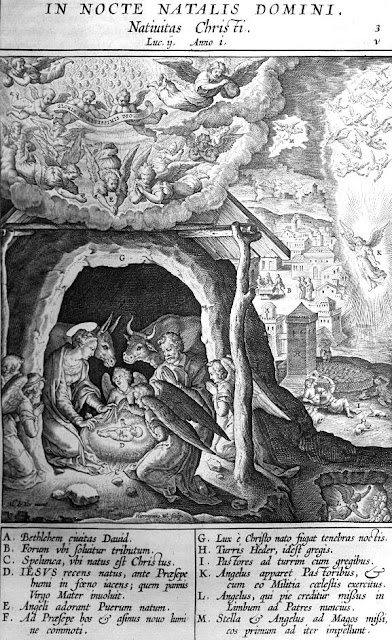 GOSPEL Luke 2:33-40
At that time, And his father and mother were wondering at those things which were spoken concerning him. And Simeon blessed them and said to Mary his mother: "Behold this child is set for the fall and for the resurrection of many in Israel and for a sign which shall be contradicted. And thy own soul a sword shall pierce, that, out of many hearts thoughts may be revealed." And there was one Anna, a prophetess, the daughter of Phanuel, of the tribe of Aser. She was far advanced in years and had lived with her husband seven years from her virginity. And she was a widow until fourscore and four years: who departed not from the temple, by fastings and prayers serving night and day. Now she, at the same hour, coming in, confessed to the Lord: and spoke of him to all that looked for the redemption of Israel. And after they had performed all things according to the law of the Lord, they returned into Galilee, to their city Nazareth. And the child grew and waxed strong, full of wisdom: and the grace of God was in him.
Friday


Although this sword of sorrow, and compassion in our blessed Lady for other peoples sins (for she had none herself) was the sword that cruelly pierced her soul, and was always present unto her: yet the sword of compassion, and sorrow for her sons afflictions which were revealed unto her, and which she after beheld with sorrowful eyes, did in equal sort continually wound her soul, and was always in her thought as present as the other was.

Now who can justly, complain of such sorrows, and afflictions as God sendeth them: seeing the blessed Virgin Mary so highly beloved of God above all his other creatures, as being chased to be mother of Christ, was so deeply wounded with this sword of affliction, as with an especial favor, and honor bestowed upon her by God: next unto the dignity of being made mother of God: Considering also that this sorrow was to increase her glory, and to make her a pattern of patience to us: she having no need of such afflictions as we have for our sins; since she was freed by especial prerogative due unto the mother of God from all sin: and we on the other side so prone unto sin, that wore it not the medicine of tribulations, and afflictions, we would commit infinite more then we do.

Tribulation, (saith the Prophet Esay) giveth a man understanding, of himself too wit, and of his ways. So the Prophet Jonas, before he was in tribulation knew not his fault; but thought he could have fled from the face of God, and died endeavor so to do, by flying from the place to which God sent him: but being in that troubled tempest upon the sea, like to be cast away, he confessed, and aggravated his sin, saying when the mariners demanded of him what he was, I am an Hebrew, and fear that Lord my God who made heaven, and earth; that is to say: I am one of the people of God by especial calling, and profession, (as Catholics are in Christs Church, in comparison of other sectaries) by reason whereof I more clearly see my fault committed against almighty God.

Behold how tribulation made him know himself, and acknowledge his sin. And as it made him acknowledge his fault; so was it a means of curing it: for he desired for satisfaction to be cast into the sea; not out of despair, but out of faith, and revenue to God and being cast into the sea, a whale prepared by Gods providence swallowed him unto her belly, where he remained three days, and nights; and was after cast upon the shore safe, and sound.

A figure or example teaching us that though we shun tribulation, as a devouring whale: yet once cast there into, and embracing it patiently for Gods sake, we shall be kept safe from all harm, as Jonas was in the belly of the whale, and at length be delivered happily from our afflictions, and our soul be preserved for heave, which otherwise would have perished in the waters of prosperity, and pleasures.

Patience in tribulations is like the Ark of Noe; if we keep ourselves in patience, as Noe, and his family did in the ark upon the waters of the flood: which did not hurt him, but lifted him up so much higher, by how much greater they grew.

Even so the waters of affliction, will not only not harm us, if we retain ourselves in patience, but lift is so much higher towards heaven, by reason of the reward promised to our sufferance, and to conformity of our will with the will of God.

Affliction patiently sustained for the love of God, is so rich a commodity, that no conscience would change the gain thereof for any other riches of this world. It is so sweet and comfortable to the soul that liveth God truly: (how harsh so ever it seem unto the body;) that Christ our Lord compareth it to a cup, wherein we quench our thirst, or one friend drinketh a health unto the other.

For when Saint John, and Saint James desired of Christ, to set the one on his right hand, and the other on his left in his Kingdom (which they though would have been of this world;) then Christ, turned his talk to afflictions, and tribulations, asking them: can you drink of the cup, which I am to drink of? that was to drink a health unto them; as if he had said: can you cheerfully suffer affliction for my sake, as I am to suffer for yours?if you can willingly, and patiently so do: you shall find it as pleasant, and comfortable to your souls, as a cup of pleasant liquor to your bodies.

And when they answered, that they could do so: he said: drink of my cup you shall: but not sit at my right, and left hand in prosperity as you desire. In which words, by calling his afflictions, and passions a cup, he declared how much he did thirst after it: and by granting it to them instead of the honor they affected, he taught them that adversity was better for them then prosperity.

And by asking of them whether they could drink of his cup: he did as it were earnestly invite them there unto; and not only them, but all us that covert to be his servants, and followers. And doubtless those who drink of this cup in imitation of Christ, with a cheerful, and willing mind, after they have once tasted of the comforts which God sendeth unto them amidst these afflictions: they become more desirous to suffer for him, and as the espouse saith to her companions in the canticles, they run after the sweet odors wherewith our Savior doth presume these tribulations, to make us more, and more weary of worldly delights, and greedy of heavenly consolations.