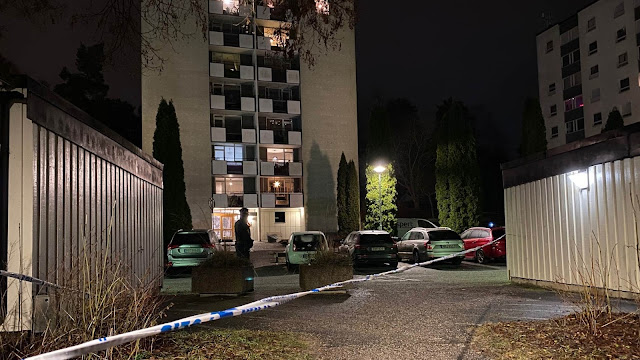 2 powerful explosions devastate apartment buildings in Stockholm
Two powerful bomb explosions devastated apartment buildings in the Swedish capital Stockholm, local media reported Monday. No injuries were reported following the explosions, but five people have been arrested on suspicion of various crimes in connection with the incident, according to public broadcaster SVT. Bomb technicians and forensic technicians are investigating the scene and the police have launched a preliminary investigation into the incidents. Shortly after 3 a.m. local time Monday (0200GMT), police and emergency services were called to Grimsta in western Stockholm after an explosion, SVT reported. “I was woken up by the bang and didn't have time to think but was in a state of shock. I flew out of bed and ran straight to my child, who was scared,” said a resident who showed his apartment to SVT and wanted to remain anonymous out of concern for his child. “Terrible that it will happen in Sweden in 2023. You should be safe in your own home, but apparently not,” he said. According to the police, the building suffered extensive damage. “It was an extremely powerful explosion which has caused extensive damage to the entrance to the residential building,” police officer Ola Osterling told news outlet TT.
'A big bang'
Local media reported that a well-known rap artist has been arrested as a suspect in the incident. The rapper is known to have links to criminal circles, according to the Aftonbladet daily. Police believe the explosion may have targeted another well-known rapper, it said. In Grimsta many were affected after the bombing, with windows smashed in several apartments. “It was a big bang, it felt like it was war,” a resident told SVT. Another explosion occurred in Bagarmossen in southern Stockholm just before 4.30 a.m. local time (0330GMT). According to SVT, a man was arrested this morning on suspicion of participation in dangerous destruction and illegal threats. Police currently do not see any connection between the two explosions but say they will investigate them in the wake of several recent incidents, including a New Year’s Eve shooting death of 20-year-old man in Vallingby in Grimsta. Explosions are growing more common in Sweden, where gang members often target rivals with bombings. Source
Email Post