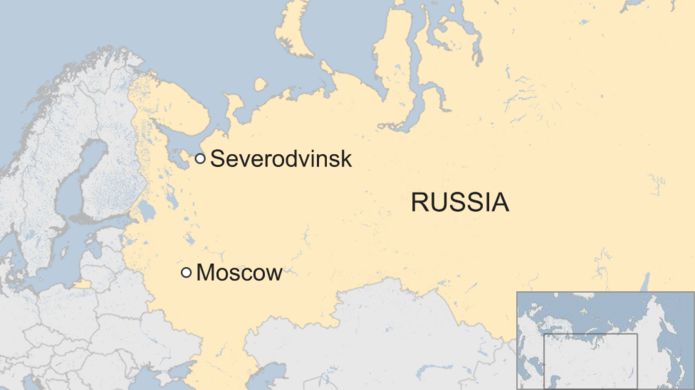 A rocket engine explosion on a naval test range in northern Russia has killed two people and injured six, the defence ministry told Russian media. The victims of the explosion in Arkhangelsk region were civilian specialists while military and civilian personnel are among the injured. The ministry said radiation levels were normal but the city of Severodvinsk registered a "brief spike" in levels. An area of the White Sea nearby has reportedly been closed for a month. But the deputy head of Archangelsk port, Sergei Kozub, told the BBC the closure was planned before the accident. Radiation levels peaked between 11:50 and 12:30 (08:50-09:30 GMT) before falling and normalising by 14:00, the city administration in Severodvinsk said on its website, without reporting how significant the spike had been. It is unclear what could have caused radiation levels to rise. Local people were reportedly urged to take precautions against radiation. No increase in ambulance call-outs was recorded, the administration added. A woman in Severodvinsk named only Alina told Russian news site lenta.ru: "I work in the hospital where they're bringing the injured. Source
Following up SUMMER EXPLOSIONS Posts: