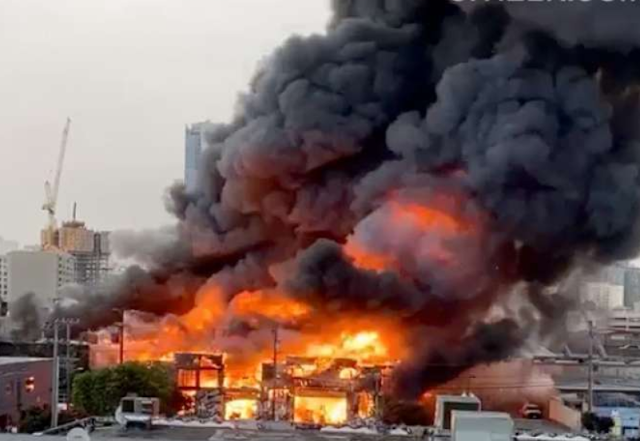 A fire tearing through multiple structures in San Francisco's South of Market area near the Central Freeway sent orange flames and a black cloud of smoke high into the sky Tuesday morning. The San Francisco Fire Department described the incident as a five-alarm fire impacting six buildings and said 160 firefighters are battling the blaze. The fire was reported at about 7 a.m. and was 15% contained at 8 a.m., according to SFFD spokesperson Jonathan Baxter. One firefighter was injured and taken to San Francisco General Hospital. He is expected to recover. Falling power lines impeded firefighting efforts, according to KTVU. SFFD asked people to avoid the area of Folsom and 13th streets and South Van Ness and Howard streets. The fire has closed the Van Ness on-ramp to southbound 101 and a portion of South Van Ness, and stalled traffic on the Central Freeway. The cause of the fire is under investigation. No injuries had been reported as of 8 a.m. Source